Here’s a quick tip for launching applications with a simple keypress rather than having to hunt it down in the program files menus (although I really like the search facility in the Vista start menu!)

First up, I created a Keyboard Shortcuts folder in my program files folder and added shortcuts for each of the applications I want to launch from a keypress. I’ve also included the shortcut key I’ve assigned in the name for simple reference. It’s important to be able to track down which keys are assigned to which apps because you can re-assign the key without realising you’re overwriting a previous one. Here’s my shortcuts in the start menu… 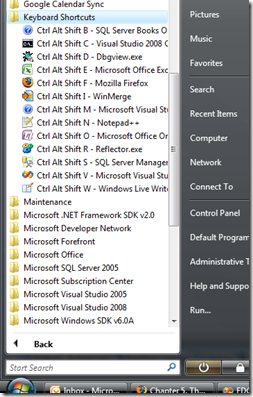 The only issues I’ve noticed when I’ve done this is I’ve re-mapped a keypress that already exists in another application. This usually isn’t a problem if I choose a shortcut of CTRL + SHIFT + ALT (which is only two key presses on a keyboard - ALT GR and SHIFT) since that’s a pretty unusual shortcut for an application. But it just so happened at one point that Visual Studio on my machine had assigned a keypress of CTRL + SHIFT + ALT + E which meant that the one I had defined took priority!