My last post concentrated on looking at how an Aurelia app is bundled. I intentionally kept things very simple so now I want to tackle some of the detail.

In particular, this post will investigate how to integrate the building and bundling of my Aurelia app inside an existing ASP.NET WebForms/MVC application. Here are some things I need to keep in mind:

This blog is being written as I investigate to it might be a bit wordy at times but hopefully the journey will prove interesting!

My Visual Studio project folder structure currently looks like this:

This is obviously highly stylised and I’ve omitted lots of other folders but the ones above should prove useful and at the least provides a framework for discussing below.

My first decision is whether to create a completely separate application for the Aurelia SPA or just include all the necessary files in this current project. I’ve opted for the latter since the rest of the Web Project will migrate to using Aurelia in the future and hopefully removing all the WebForms and most of the ASP.NET MVC code. Development should be possible either within Visual Studio (TypeScript support is excellent and I might take this route in the future) but currently I’m using Sublime Text so having a sub-folder for the Aurelia would seem appropriate since I won’t want to edit anything else in Sublime!

I’ll take a wild stab at what I expect the Aurelia code to looks at and expect to have this:

I’ll create the bundle.js in the Scripts/ folder since it feels in-keeping with the structure I’ve been used to so far. The Dist/ and Src/ folders won’t be deployed - I did consider putting both of these folder in App_Code/ since that’s special folder that ASP.NET will never deliver to the browser but for some reason I’m try not to lean on anything in ASP.NET!

I’m going to modify a project I added to github for my previous blog and change this to mirror the folder structure I want along with having the gulp build tasks I’ll need too. I’ll also plan on wrapping it in a Visual Studio project so I can test the integration.

My first change to this project is to move the files around into the following:

This broke the app since the System.import("main"); in index.html can’t find main anymore. However, this is easily fixed by letting SystemJS know where to look for modules in the config.js:

The new line "*": "src/*" tells SystemJS that to find anything look in src/ unless there’s a more specific matching path.

If I now run gulp bundle I discover the site is broken which is to be expected since that bundling is generating build.js in the root whilst the path configuration above will look for src/build.js.

There are a couple of changes to make here. The first is in the gulpfile.js which now looks like this:

The change is naming the bundle "dist/build": { ... } instead of "build": { ... } so that the build.js is placed in the dist folder. I’ve also taken this chance to add "sourceMaps": true so build.js.map is generated along side it.

The second change is to change config.js and swap the path "*": "src/*" for "*": "dist/*"! Obviously I’ve just changed this once already but this now makes a lot more sense even more sense when there’s a gulp watch and build to automatically keep dist up-to-date with the latest development changes which are subsequently delivered from the dist folder.

I’m going to create a Visual Studio project now and pull in the files so I’ll spin up VS and select File -> New Project and select the ASP.NET Web Application template. The name is bundling-with-jspm-and-aurelia whilst the location is the parent folder so c:\github - doh, but VS won’t let me do that so I’ll create it in a new folder and copy over what I need.

From the Web templates I’ll simply create the Empty ASP.NET 4.5.1 Template - it will be interesting to see how the ASP.NET 5 Preview Template might help me here but I’m integrating into an existing project so that’s another blog :)

In Visual Studio I’ve reloaded the project, selected Show all files from the Solution Explorer toolbar then included all my project files (but not jspm_packages/ or node_modules/ - I made that mistake and it’s painful!)

Here’s how my solution explorer looks:

At this point I’m going to need a build gulp task to compile everything from src/ into dist/ so I can then bundle.

I’m undecided whether to have an intermediate folder for the build since this might make it easier to take a single folder containing bundles and pull/link it into Visual Studio. So for example I develop in src/, build to jsbuild/ then bundle into dist/. I’ll come back to this later.

I’m going to use the build.js from the Aurelia Skeleton app and put this into build/tasks/ which seems to be a fairly standard folder stucture now. This means I’ve also copied the current contents of gulpfile.js and moved it to build/tasks/bundle.js and replaced it with:

There are a lot of packages to install since they’re all require()'d by the gulp tasks. I’ve also had to copy across clean.js, babel-options.js and paths.js from Aurelia Skeleton.

However, once all that was done I could run the following:

And I end up with a dist/ folder full of my built files but also build.js and build.js.map which are the bundled files I’ll need ultimately.

Visual Studio 2015 now includes the Task Runner Explorer which used to be an extension. This automatically finds gulpfile.js and interprets its content given me the following options:

At this point I can right-click any of the tasks and run them with output displayed in the runner. However, even more useful is the ability to bind the tasks to events in Visual Studio: 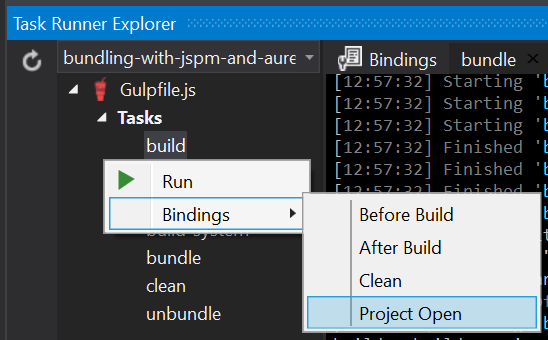 I’ve gone for the latter option although it took me a google search to find out why Visual Studio wasn’t persisting my choice! When you change the bindings Visual Studio puts a comment at the top of gulpfile.js but it didn’t save it when I close the solution and reloaded. Therefore, make sure gulpfile.js looks like the following and it’s saved:

Now whenever I make a change to the html, css or javascript the code is compiled immediately providing instant feedback. I might even be able to connect up browser sync but I’m planning on having the site delivered through IIS Express at this point.

In order for the development build to be delivered correctly the app must be unbundled first since at the moment gulp watch cleans the dist/ folder which means config.js will point to a build.js bundle that no longer exists!

At this point I’m going to want the build and bundle tasks run on the build server along with npm install and jspm install -y which are required to restore all the packages.

This is actually surprisingly easy. I’m adamant that changing the TFS build process templates is a terrible idea since debugging them is slow and laborious. Instead I prefer to integrate into the project msbuilds allowing everything to be tested and debugged locally before checking into source control. It also means we could move from TFS builds to another build server with very little effort if required.

The first step is to create a file called SpaBuild.msbuild which will contain all the logic to build our app:

I won’t go into too much detail here since it’s fairly self-explanatory. However here are a few bullet points:

This build script is the imported into any required csproj file with the following code:

Now the spa build and bundle can be run at the command-line:

These parameters can then be plugged into the TFS Build Definition as arguments to the MSBuild:

Bundling into Deployment with Octopus

This blog post has gone on far too long so I’m going to cheat and simply say that Octopus leverages nuget project files and I will probably add my own customised one that pulls the bundled files in leaving all the otherwise behind.

The final integration into Visual Studio feels pretty seamless and given the watch task launches automatically when I load the project there’s simply nothing left to do. Admittedly I’m not planning on developing against the bundled version but that seems fair enough and I’ve always got the option to run the bundle manually and launch my browser.

The source for everything can be found in github